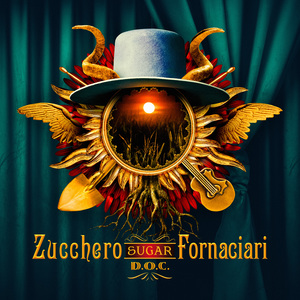 Italian blues rock icon Zucchero is set to release his new studio album D.O.C. in the U.S. on December 6th, 2019 via Wrasse Records. The album’s U.S. release is timed to coincide with several U.S. tour dates being announced for April 2020 and an esteemed performance at the 30th annual Rainforest ...

Fund concert at the Beacon Theatre in New York, where he will perform and do a duet with Sting.

Italy’s premiere bluesman and maverick pop star Zucchero has always known how to put together a top-selling album: Work with legendary producer Don Was. Write with and top rock and blues players around the world. Crank out a multitude of frenzied songs, then whittle the tracklist down to just the strongest.

With that signature wit and flair, with grit learned from the blues and R&B heroes who Zucchero has been a devoted student of since his start in the 1970s--the singer and songwriter builds on a life’s worth of playing, thinking, and troublemaking with the release of his eagerly awaited new studio album D.O.C. (U.S. release:  December 6, 2019 on Wrasse Records). The album’s U.S. release is timed to coincide with several U.S. tour dates being announced for April 2020 and an esteemed performance at the 30th annual Rainforest Fund concert at the Beacon Theatre in New York, where he will perform and do a duet with Sting.

Three and a half years after the release of his previous album Black Cat (which included collaborations with the likes of Elvis Costello and Bono) and after selling more than 60 million records in his career, Italy’s best loved and most appreciated artist worldwide returns with a new and surprising album. D.O.C. (which stands for denominazione d’origine controllata or “controlled designation of origin,”) is a tongue-in-cheek play on the European wine classification system and certifies the album as an authentic, genuine and high-quality collection of 11 brand new songs plus 3 bonus tracks. The album is available on CD, Double Vinyl, and a special Double Orange Vinyl format (limited edition exclusively for Amazon).

Produced by Don Was and Zucchero with Max Marcolini, D.O.C. was conceived by the artist  in Pontremoli at his Lunisiana Soul, and was recorded in takes between Los Angeles and San Francisco. The eclectic songwriter collaborated with a number of songwriters on many of the tracks, including Francesco De Gregori on “Tempo al Tempo,” Davide Van De Sfroos on “Testa o Croce,” Pasquale Panella and Daniel Vuletic on “La canzone che se ne va,” Rory Graham (known as Rag’n’Bone Man), Steve Robson and Martin Brammer (on “Freedom,” F. Anthony White (known as Eg White) and Mo Jamil Adeniran on “Vittime del Cool,” and Scandinavian artist Frida Sundemo on “Cose che già sai”.

D.O.C.’s first single, “My Freedom,” which opens with haunting synth chords,  followed by a heavy chugging guitar and a strong drum beat, is an ode to liberty and to love, co-written with British artist RAG’N’BONE MAN. The song is distinguished by a sophisticated sound and an international feel, the fruit of a new musical exploration which has been blended with the traditional, tried and tested “Sugar” style.

The video for the lead track, which features images representing the concept of liberty, was shot in California, Nevada and Utah, and was directed by Gaetano Morbioli for Run Multimedia. In it, the artist’s alter ego, the protagonist of “My Freedom”, is a majestic black stallion, a symbol of strength and fighting spirit. Helped by a sensitive young girl, the horse with a wild and rebellious heart is able to win his freedom and be reunited with his own kind. The story, in its simplicity, captivates the attention of the viewer, who feels a connection with the star of the video, hoping he will be able to run free to the sound of Zucchero’s first single from the new album, because, “I could not restrain myself”.

Best known stateside for his single with Paul Young, “Senza una donna,” Zucchero, born Adelmo Fornaciari, may be one of the few artists to work with both Luciano Pavarotti and naughty filmmaker Tinto Brass. He’s toured with Miles Davis, rubbed shoulders with everyone from Mandela to Dan Ackroyd. His past and current collaborations read like a who’s who of rock, intelligent pop, jazz, blues, and classical:  Eric Clapton, Ray Charles, B.B King, Sting, Jeff Beck and Andrea Bocelli. (His fun, freewheeling autobiography chronicling these adventures came out in 2017).

Yet the A-list glitter belies the raw and raucous heart of Zucchero’s most recent musical offerings on D.O.C. He has presented the album live throughout the world since April, starting from Australia and reaching the Verona Arena in Italy in September. North American tour dates for April 2020 are soon to be confirmed.